In this infographic I think it’s no surprise that there were so many short passes, however it was surprising to see how low the number of long passes were.

I think this indicates that most of Midfield players were playing more of a build-up game rather than playing a more direct style of play.

How To Play Attacking Midfield

Attacking Midfielders are offensive playmakers, they help to create goal scoring opportunities along with scoring goals.

Here is a collection of some of the greatest quotes from Midfielders about football. These quotes express the way they feel and think about the game.

“Wow, what a list!” — The Ultimate List of All Midfielders that will be playing in the World Cup

Enganche: Is from Argentina and means ‘the hook’ and refers to a midfield Playmaker (#10). Responsible for the transitional play between the deeper midfielders and attackers.

Regista: Is Italian for ‘film director’. And in football refers to a deep-lying playmaker who ‘directs’ the play, i.e. Pirlo, Xavi and Xabi Alonso. 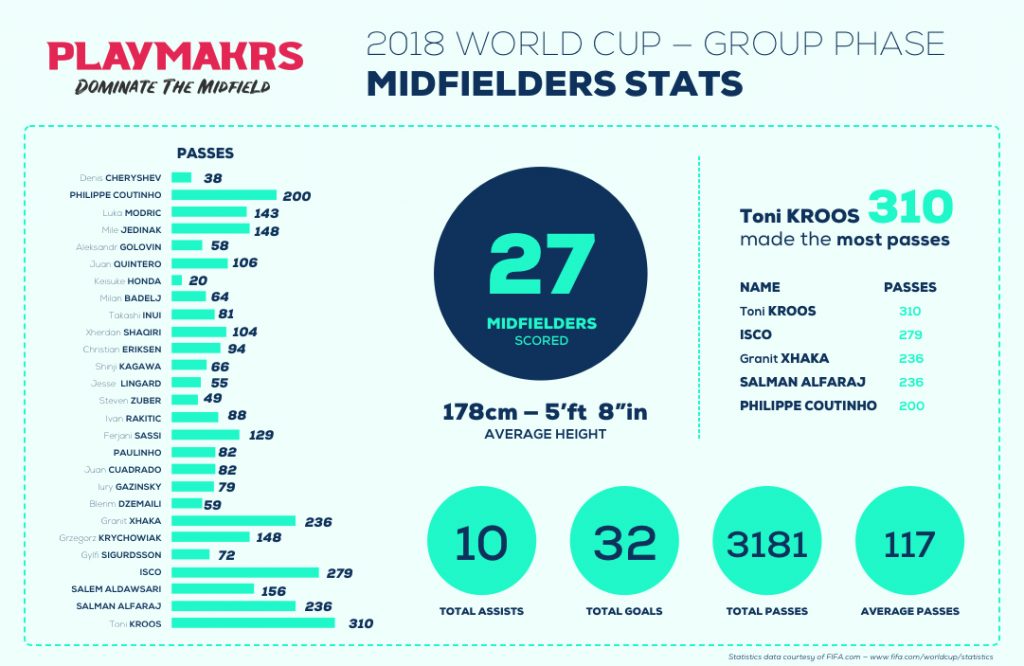 Infographic that shows the various stats by midfielders in the 2018 World Cup Group Phase.

LINKS FROM AROUND THE WEB

Liverpool’s Jürgen Klopp concerned by increasing demands on internationals. Klopp is concerned that the UEFA Nations League will have serious consequences to Club football. Adding more games to an already demanding schedule for footballers could lead to more injuries.

Did you enjoy this issue?

Like us 👍, heart us ❤️ and tweet us 🐦 to show your support or give us your feedback!

✏️ What did you think of this week’s email?

💡 What should we include in the next issue?

🤔 How has your playmaking been this week?

📬 Forward this email to a friend

Please select the Tab Content in the Widget Settings.

Show The World You’re A Playmakr

On Playmakrs we celebrate great midfielders and everything it takes to become a better midfielder.